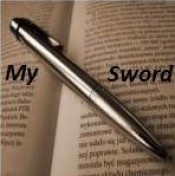 Call myself a writer and I can't come up with anything to say...
Well, I'm nineteen... I write all my own quotes except those credited otherwise (sorry about those few from my brief first time on here, which aren't credited)... I do my own fontwork... I read a lot... I write more than that... I've somehow managed to keep a journal since fifth grade... my weird interests include old music, old musicals, and the Apollo missions... and I can't shut up. In case you couldn't tell. :- J
~Bee
PS: Anyone wondering- my username comes from the George Strait song from Pure Country (cute movie...)