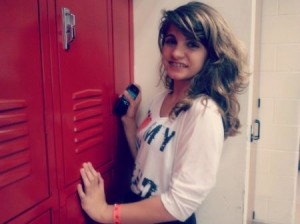 Don't forget who you are, don't change to get his attention. Society is insecurity.