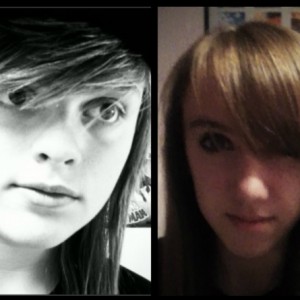 Status: WE ARE BACK

We are Evie and Bethany and this is our story writing account. We haven't actually been online since last generation witty, and I (Bethany) want to change that. So I'm going to try to get Evie back online, and writing again.
I really miss using this account and it took quite a few tries to get the right password.
We wrote 2 and a half stories on this account. Waking Up In Vegas (mine), Revenge (Evie's) and our joint story that we never finished - Some Things Shouldn't Be Written Down. Obviously, we wont be finishing Some Things Wont Be Written Down - so here's how it ends.
Moth and Xavier end up together, Moth gets pregnant and Kate and her never speak again. Ta-Da!
So we are both fans of Sleeping With Sirens, and I want you to check out their new Halloween song - Dead Walker Texas Ranger. It's amazing.

YES. I got Evie back on, yo! I messaged her to look at the new presentation and she was like OMG yes yes yes yes yes! I was like YEA BIATCH. So woo. :) We're back. Evie made our lovely profile picture of recent pictures. Woo. :)
Also - follow me on tumblr; tumblr.com/bethykinz
I LOVE YOU.

Soon, we'll have stories up - one from the both of us, but until then, GIVE US IDEAS. We have no ideas so far. I NEED IDEAS, YO! Siiighhhhh. PFftttt..
I'm writing a story on my main account but I don't even know where to go with that. Suicide? Nahh... Um, so in my story, Tyn's dead - which is pretty sad. He's awesome. And they just a had a funeral and it's going through memories and crap - but I might just end it with like, 2017. I'm standing here on the aniversary of my brother's death. Not just his death-day anymore. But my wedding day. Yes - I found a guy; how lucky, huh? I wish Kels was here; I guess Tyn's death hit her harder than she let on..

Yeah - that's all I got for the Epilogue of that. You see, when you get writers block, you're meant to just write something different for a while - to get your creative juices flowing; that's what Living In The BackStreets is supposed to be - but it's not helping me write The Girl Who Lost Her Way whatsoever. I still don't know what to do. I mean, Bella's in the Army Base; she's found Riley once - and just let him walk away. WHAT TO DO?

I might stop writing this now. I mean, this isn't much of a presentation - more of just a general rambling.