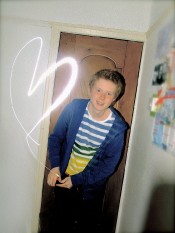 Hello there.
I'm alnicholas, nice to meet you! I have left this 'bio' area blank for quite some time now and thought I would write something. I just realised I have been on Witty nearly a year (joined 25th April 2011), the time has flown, I can hardly believe it. I witnessed the demise of James Brass, the rise and fall of Brandon Cyrus, the 'Big Witty Crash of 2011', the craze of Harry Potter quotes, the 'Fave for a rate' quotes, the One Direction craze and the Hunger Games craze and many more. I have seen this place change big time! The other day I looked at my follower count. I had no idea it was so high, I have never promised a follow back or asked for a single follower, so to know that over 2000 people on Earth have conciously decided to 'Follow' me and care about what I have to say absolutley overwhelmes me. I know it's not the most followers on here, not by a far, but I thank every single follower from the bottom of my heart. It really does mean so much to me. I have quotes with over 3000 favourites,  it's insane.  So...Why am I writing this? Well I am not really sure myself, but I just feel I owe a thank you to everyone on this website for not only favouriting, commenting and following me and my quotes, but for writing their own quotes which inspire, change and help me, which make me laugh, which make me think. I doubt a single person will actually be bothered to read this but I just felt the need to show some kind of acknowledgement to everyone on here who has made me so happy! I may not be as 'popular' or 'well known' on here as I used to be, but regardless, I'm going to keep making quotes and I hope you'll stick around to see them :)! Oh and also I have hidden the links to my Youtube videos on this page somewhere, if you're a true 'Wittian' they shouldn't be that hard to find! ;)
Love from Alastair :)

Hi I'm alastair nicholas, from England UK, please take a look at my quotes and comment if you like!
Thanks a lot! twitter  http://twitter.com/AlastairReed131
---
I've been getting a lot of comment asking me stuff so I thought I'd do this :)!
My full name is - Alastair Nicholas Reed
I am - 16
My birthday is - 26th November
My eyes are - Blue
My hair is - Red/Brown
and I live in- England